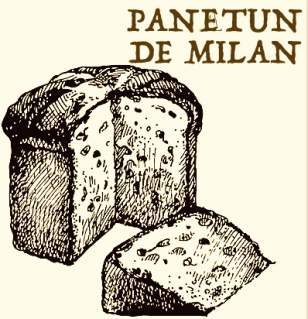 There are several legends about the birth of the milanese panettone.
The most common dates back to the 1476. It tells of Ugo, a young falconer
who worked for Ludovico il Moro, the Duke of Milan.

The boy was secretly in love with Adalgisa, daughter of Toni, the most popular baker in Milan. To spend more time with her, Ugo managed to become a pastry cook apprentice. Christmas was coming, and Ugo wanted to give a twist to the usual bread.He sweetened up the dough, adding sugar, butter, eggs, raisins and chopped candied fruits, then he cooked and shaped it like a giant muffin.

The history goes on
After centuries, the panettone is still the delicious centerpiece at many festive tables,
In 1930, two well-known patisserie masters, Mr. Agostino Panigada and Mr. Giovanni Cova came together to create their first workshop in Viale Nurzia in Milan. Here the real “Panetun di Milan” was born.
Traditional Panettone generously filled with  raisins and candied fruit peel (including a lot of squared oranges that I love) The “Milanese” pound (Libbra) is an ancient unit of measurement of Northern Italy – it corresponds to 1120 grams. Breramilano. have adopted this peculiarity to highlight the prestigious “Milano” line, where the combination between taste and art reaches the most impressive outcome. 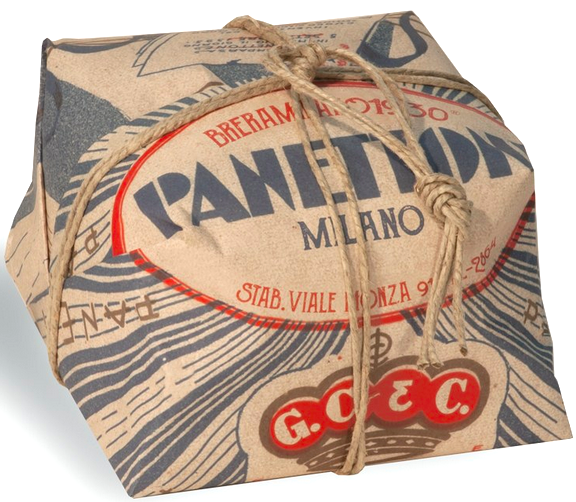 This line, called BreraMilano1930 (now widely distributed in the US)  is characterized by making use of a special paper, rough to the touch, that takes its stylistic inspiration from their original 1930s collections.  Breramilano produces superior quality confections particularly their Panettone and Pandoro which are known as the undoubted symbols of Milanese confectionary art all over the world. For this company, remembering and respecting the past means keeping alive the ancient confectionary art traditions, respecting old recipes and checking every single ingredient for quality. Their aim is to keep alive the flavors of the past as time goes by.
Finally, like in the old times, this panettone is rigorously hand wrapped exactly like they use to do in the old Milan …