Weekend in Franconia: wine, gastronomy and art in spectacular Nuremberg
by Cesare Zucca

WINES OF FRANCONIA
Famous for the great quality of its beers and for its excellent cuisine, Franconia also reserves pleasant oenological surprises.Thanks to the climate and the minerality of the soil, Franconia boasts a territory from which high quality wines are derived. .

Among the red grape varieties, the most common are Pinot Noir (Spätburgunder) and Domina, but the whites predominate: Riesling, Müller-Thurgau and Bacchus and Silvaner, born in Franconia in 1659, created by crossing the Traminer , one of the oldest vines in the world, and the Austrian White. It is a fresh and lively wine with aromas of honey and dried fruit, enclosed in the traditional Bocksbeutel round bottle.

From mid-September to mid-November, Franconian wines are celebrated in the numerous themed “Wein & Winzer Festa”, from the search for a lover, to candlelit tastings, to happy hours.
Where to taste the best wines
Three magical villages: the baroque town of Würzburg, Castell where the old houses embrace the vineyards, Iphofen, promoter of visits to wineries, tastings and enocultural events such as the Fürstliche Castell’sches Domänenamta.

Today we take you to Nuremberg.
Dating back to 1050, it was the scene of important historical events, including the famous trial. After the Second World War, due to the many Allied bombings, the city was completely and very well restored and so was its historic center. 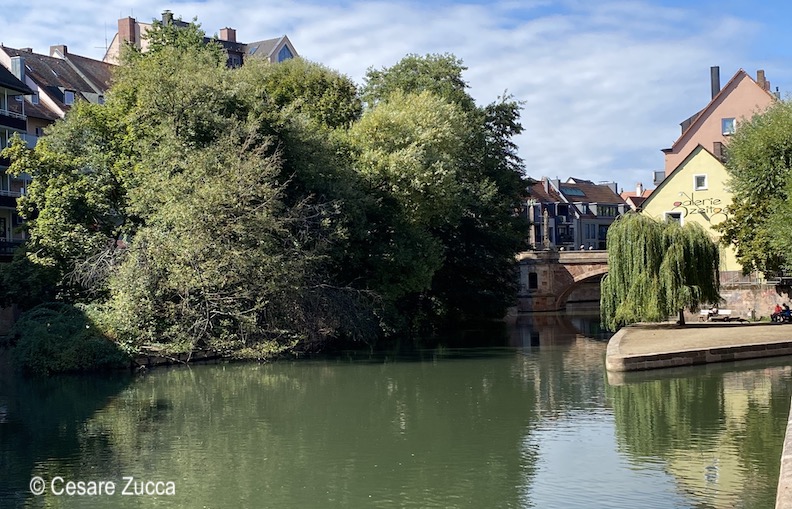 City known for its cheerfulness, its colors, its luxuriant trees, the sun, the swarming of people, the museums, the castle, its renowned Red Barrel and Fränkische Weinstube wine bars and its no less famous rostbratwurst, legendary sausages that to get this name and authenticity, they must only be produced by Nuremberg butchers. 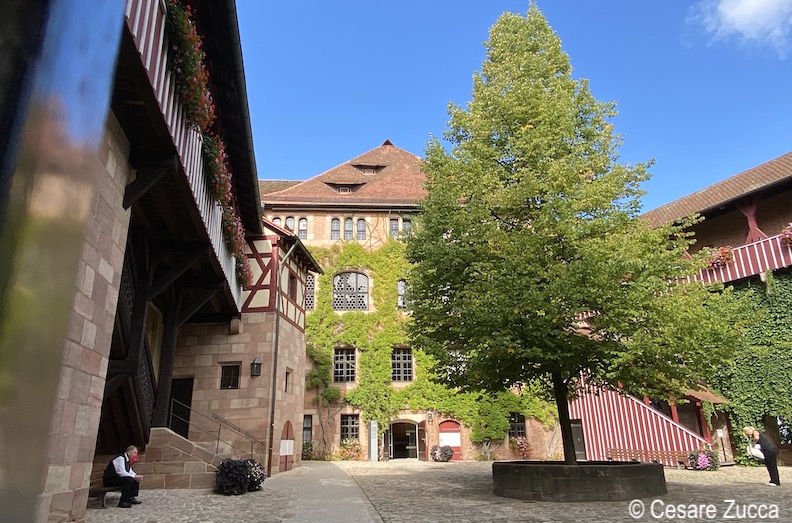 READY FOR A TOUR FULL OF BEAUTY AND TASTE?
Altstadt, is the heart of the city where you will discover Hauptmarkt, the square of the ancient of Nuremberg. Here some real jewels await you: the Lorenzkirche (St. Lawrence Church) and Frauenkirche (“Church of Our Lady”), a wonderful example of Gothic architecture, with its Männleinlaufen, a mechanical clock that opens wide the small doors from which the Emperor and his court.

A little further on, a true triumph of selfies … in front of the Schöner Brunnen, “the beautiful fountain, about 19 meters high. It is inspired by a Gothic spire, adorned with figures representing philosophy, the liberal arts, the Evangelists, the Fathers of the Church, the electors, Moses and the Prophets. Protected by an iron fence, closed by two rings which, so the legend says, bring luck if they are touched … Try …

Since the beginning of October, the square is lit up with Christmas lights and filled with stalls offering festive decorations, handcrafted creations and delicacies… including the traditional Wicklein butter cookies in the shape of a heart, star and of course a Christmas tree. Nothing better than munching on a couple while doing Christmas shopping.

Heilig-Geist-Spital., Hospital of the Holy Spirit, dates back to 1300 and was the largest urban institution for the care of the sick and the elderly. It is still used today as a retirement home and also has a characteristic restaurant, obtained from the old refectory.
Ship of fools, bronze sculpture by Jürgen Weber inspired by the satirical verses of Sebastian Brant dedicated to the vices and weaknesses of his time.

Henkersteg Tower (“the executioner’s bridge”), former residence of the Nuremberg executioner who had to live isolated to avoid any physical contact with the citizens, at least before … the execution.
Kettensteg, Chain Bridge. Built in 1824, the oldest chain bridge in Europe.
Weißgerbergasse Medieval headquarters of the leather trade Today it is one of the few monumental architectural complexes that survived the bombings of the war.

Albrecht-Dürer Haus  House-museum of Albrecht-Dürer, one of the country’s most important Renaissance artists in the 16th century. On the ground floor you will find a room containing copies of his paintings while on the upper floors the museum features installations of period furniture, a beautiful kitchen, and a reconstruction of the artist’s lab.

Tiergärtnertor
Small square from which you can enjoy a beautiful view of the castle and all the half-timbered houses that surround the square.
Kaiserburg
Giant imperial sandstone castle, born in the 12th century and considered one of the most important fortified imperial palaces of the Holy Roman Empire. Inside you can admire the historic rooms, precious objects, collections of weapons and armor of the knights.

Sinwell Tower, circular tower that served for prestige and defense purposes. Climbing to the top of the tower you have a beautiful view over the city. 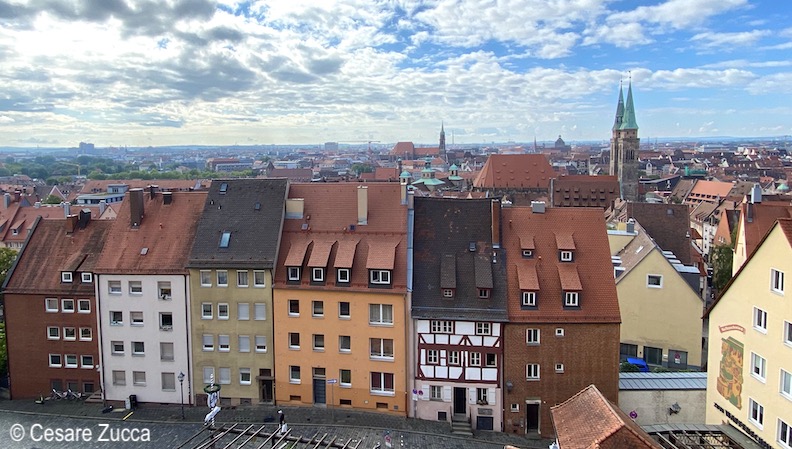 MUSEUMS
Nuremberg is home to a wide range of galleries and museums exploring its turbulent development, as well as showcasing local and international artists.
Toy Museum
A paradise for children and more… From historical toys, old-fashioned dolls to cars, trains and steam engines to modern cars and today’s classic games, such as Lego, Barbie, Playmobil or Matchbox.

Germanisches Nationalmuseum
The Germanic National Museum dates back to 1852 and houses one of the country’s most important collections of German artifacts and art, from prehistoric to modern times. You will find works by Albrecht Dürer, Rembrandt, the first surviving terrestrial globe and even the world’s first pocket watch, as well as numerous historical instruments from all over Europe.

Fembo-Haus
“House of the merchants” patrician residence, the only late Renaissance merchant residence that has withstood the adversities of time Thanks to the accurate installation “Krone, Macht, Geschichte” (Crown, Power, History) In just 30 minutes, you can relive 950 years of Nuremberg history

Museo Ferroviario Tedesco
The first German railway was born in Nuremberg. The Museum tells the story of the development of the railway system. From humble beginnings in England to German reunification, also documenting extensive refurbishment for military purposes under the Nazi regime and the role played by the railway in the Holocaust.

Neues Museum
The most important art and design museum in the city, Its impressive glass structures were developed by the famous architect Volker Staab, Collections and mixtures of innovative design and art pieces from the 1960s.

Nuremberg Court
The famous Nuremberg Trials took place at the Palace of Justice, prosecuting the remaining WWII war criminals. The hall 600 of the Palace, where the Nazis were tried, is perhaps the most famous hall of justice in the world and is still used today, especially for murder cases. The Nuremberg Tribunal represents a reminder of the country’s turbulent history, but also a reassessment of responsibilities and a troubled legacy.

Bible Museum Recently opened, it illustrates how the book was written, how it got to Bavaria. Among the novelties an ancient copy of the Bible that you can browse digitally and an authentic 18th century Bible that you can browse by hand, live. Interesting! For a comprehensive visit to Nuremberg’s museums and attractions, a great idea is to get one Nürnberg Card , online or directly at the Tourist Office in Hauptmarkt. For two days, you will have free admission to all museums and attractions in Nuremberg and you will also be able to take all means of transport in the entire region of Nuremberg, Fürth and Stein and transfer to the airport.

GASTRONOMIC DELIGHTS
Rostbratwurst, traditional (and above all authentic) sausages from Nuremberg, reigns supreme. They are grilled over the flame and traditionally served on a pewter plate, accompanied by sauerkraut, potato salad and horseradish.

Even the name is registered, the authentic ones must be produced only by the butchers of Nuremberg, Watch out for illegal immigrants! The rostbratwurst are truly loved, There is a Museum that tells their story, from the origins to the most innovative recipes.

WHERE TO EAT THE BEST SAUSAGE
Bratwurst Röslein the largest sausage restaurant in the world in the heart of Nuremberg’s Old Town
Bratwursthäusle, where the original sausages have been grilled on beech wood barbecues since 1313.
Goldenes Posthorn, Germany’s oldest wine shop, dates back to 1498. It was Dürer’s and Hans Sachs’ favorite and has been visited by kings, artists and scholars from all over the world.
Bratwurst-Glöcklein Its name dates back to the 14th century and is located right next to the Königstor, opposite Nuremberg’s main train station.
Zum Gulden Stern, the oldest sausage restaurant in the world. A must for anyone visiting Nuremberg 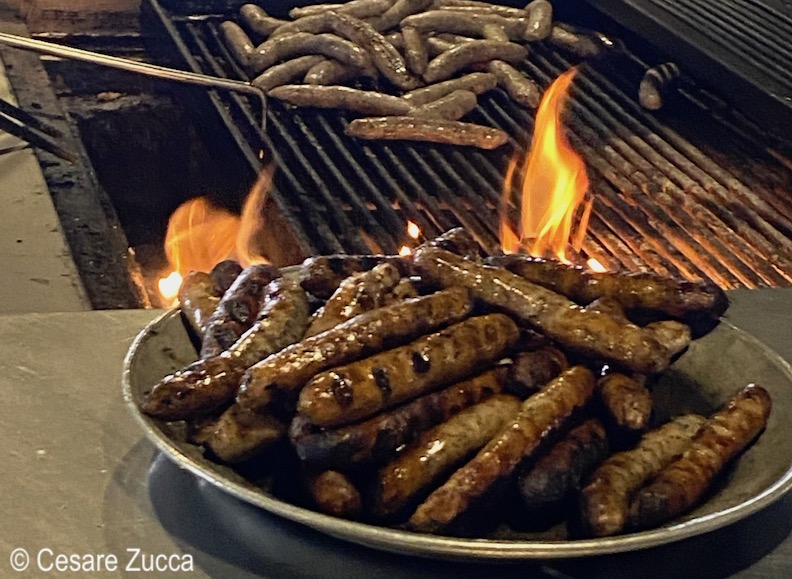 The real “king” of the table is a succulent dish made with roast pork shoulder, complete with super crunchy bone and rind, potato dumpling and red cabbage. It is called “Ofenfrisches schäufele” and is the typical Franconian Sunday meal.

The best in town? I have done extensive research and investigations, but they all agree: Halbrecht Durer Stube rustic brewery-tavern where the Chef invited me to the kitchen for a preview … What a scent … and I assure you that the meat is really tender, rich, substantial and knows how to satisfy the senses…

Art & Business Hotel
The name says it all: a 3-star superior, “design” furniture with touches of modern art, literally a stone’s throw from the train station and the shuttle to the airport.