My dear friend Stanislao De Marsanich, President of Parchi Letterari Italiani (Italian Literary Parks) invited me to a unprecedent destination in the Basilicata Region: Aliano. Why did I said unprecedent? 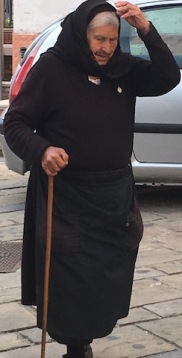 Aliano is probably the less populated village in the Southern Italy I have ever visited. 600 inhabitants, mostly older men and older women still wearing the traditional black long dress , with their hair wrapped in a black scarf, two small bars, few stores , that close in the afternoon for a long siesta, the amazing nature around , populated by calanch wich are deforested, sandy soiled, rocky hills, a church, two restaurants (Locanda con gli occhi and Sisina Contadina). Aliano is a little village n the province of Matera, located in one of the most unusual, scenic, magical and spiritual places of Basilicata. 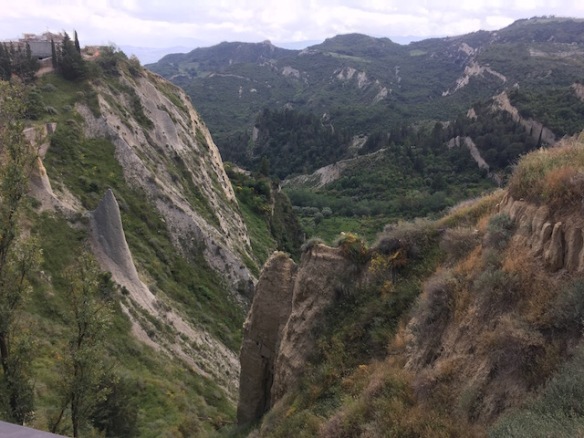 The surrounding clay landscape is characterised by naturally eroded gullies and ravines, typical of this part of the region. This is the rough, moon-like landscape of Calanch.
I walked along those ridges of breathtaking cliffs, In the silence of the badlands and I hear nothing but the sound of my own footsteps.Loliness, abandon, misery, poverty and the lunar scenario were crucial source of literary inspiration for Christ Stopped at Eboli”,

Carlo Levi’s 1944 memoir about his long exile in the area. Carlo Levi was born in 1902 in Turin, Piedmont, to wealthy parents. His father was Jewish and a doctor and his mother was the sister of Claudio Treves who was an important socialist leader in Italy. After attending to the University, young Carlo pursued is passion: painting. In 1929, Levi co-founded an anti-fascist organisation called Giustizia e Libertà for which he was arrested in 1935 and exiled to Aliano, a timeless place where ancestral customs reign: witchcraft, love potions, charlatanerie,

He lived the for nearly a year, painting, working as a doctor and observing the daily hardship of the villagers that he would later narrate about in his book, ‘Christ Stopped at Eboli On those days, the malaria was decimating the population, already living in dire poverty and Levi tells what he lives, what he sees, the life of its inhabitants, their customs, painting a region abandoned to his sad fate and writing beautiful pages about their hunger, heir fear ad their beliefs. When Carlo Levi arrived in Gagliano , supposed to stay there for three years under house arrest, he said he had “the impression of having fallen from the sky like a stone in a pond”. The book tells the story of suffering and injustices, where the peasants have more confidence in their tribe, and in their family, and have very little respect for institutions that do not bring them any security or well-being. The toddlers mortality was enormous, nearly 50% died simply because their parents could not afford medical assistance.Dispate all the negative things,

Levi fell in love with Aliano where he asked to be buried. In Aliano.The Literary Park s dedicated to him as well as a museum that offers personal letters, documents and drawings related to the period during which Levi lived in Aliano.

I Walked around the city center, where venues and places his book relive in plates reporting extracts from. In the silence of the badlands, I hear nothing but the sound of my own footsteps.

Let me tell about Aliano’s houses…

They have facades somehow mysterious , sinister or curious, they look magical with some sort of exoteric message.The most famous is La casa con gli occhi (the House with the Eyes)

which the small windows create a gloomy wing, beyond which the gash due to the roof’s falling down allowed the pale sun to enter.Aliano has its own dialect, “Alianese”, and the population keep many old traditions. One particular example is that, during Carnevale (a catholic festival that takes place a few weeks before Easter) village men, dressed in paper mache masks, hats covered with streamers, wearing long underwear and cow bells, march down the town’s main street, throwing flour at gathered crowds and making grunting noiss.Very interesting the Museum housed in the old oil mill under Carlo’s confiscation house, with the original millstones still present, and all the home furnishings, work tools and much more.

He is known for his paintings and drawings that examine the subject of time and the vacillations between the abstract and the figurative. His subtle over painting creates dense textures

which often seem to be clearly aware of the historical range of abstraction and the way it brushed up against figurations, from the cave paintings through contemporary figures. I stayed at La Casa De’’Americano a cozy two bedroom family managed bed & breakfast, and had my meals at their restaurant called La Locanda con gli Occhi. Dishes are simple and respect the alianese cooking tradition, from yasty cold cuts to hearty fresh vegetable soups, to lamb,