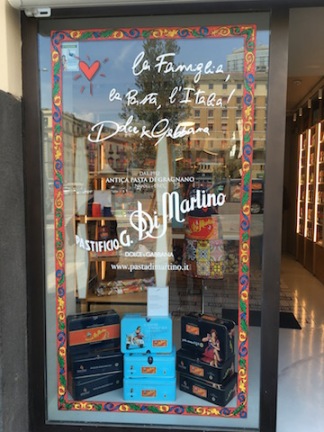 Naples:
I discovered a real gem!

Two floors of pasta Heaven, right in the middle of the Piazza Municipio, destined to become one of the most beautiful square in Europe, right in the center of enchanting Naples, facing the spectacular Castello dell’Ovo,  overlooking the blue Mediterranean sea and boasting 120 different kind of famous pasta di Gragnano, to buy, to taste, either on-site or to go, while cruising the streets of one of the most magical city in the world… 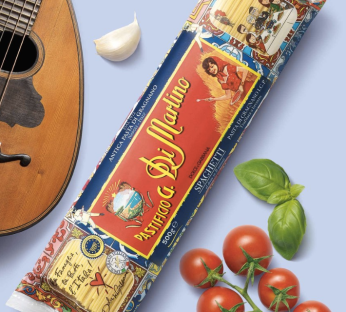 What else you looking for? 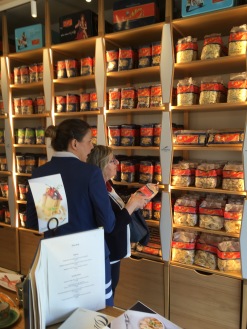 Welcome to Sea Front Di Martino Pasta Bar. Since 1912, three generations of the Di Martino family have owned and run the company in Gragnano, an ancient town that over five hundred years is producing the highest quality of pasta using the best durum wheat semolina pasta mixed to the local spring water, while the slow extrusion of the dough through broze die, gives to pasta a very rough surface able to hold the sauces and keep the tasty flavors. 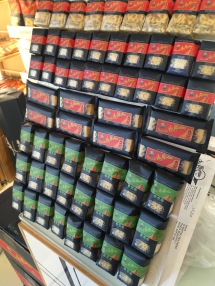 Di Martino launched a revolutionary style to fully appreciate the food that truly represents the traditional Neapolitan cuisine: the one and only spaghetti.
Let ‘s start from the beginning. A street level super furnished pasta store and lovely hostesses, welcome Neapolitans and tourists. 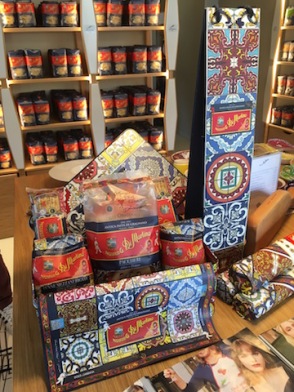 Here you can buy the all formats of pasta (over one hundred) among cute gadgets like magnets, aprons and exclusive boxes designed by Naples lovers designers Dolce & Gabbana.

On the corner, you will find a takeaway window that sales (for only 5 Euros!) a box generously filled of perfectly cooked spaghetti with the richest tomato sauce that literally floods on a slice of bread on the bottom, renewing the traditional way to do the scarpetta.

It’s called La Devozione (The Devotion), a tribute of sacred and profane to give solemnity to His Majesty Spaghetti, insanely loved by the Neapolitans and foodies all over the world. Caged in an original and eco-friendly box, either traditionally back and yellow version or the newest designers patterns, there are 130 grams of Gragnano PGI spaghetti Di Martino, stirred in a generous tomato sauce, extra virgin olive oil, basil, a clove of garlic (rigorously toasted with its peel, as the Chef Gianluca Pisacane told me…)

then sprinkled with fresh basil ripped by hands. Do not use a knife, that could oxidize the basil and finalized with a slice of bread placed on the bottom of the container. All prepared espresso under your eyes, in just 8 minutes, 4 in the boiling water and 4 in the sauce, giving everyone the opportunity to spy the tricks that will make a great pasta dish.

Let’s go upstairs. On the first floor you will find the open kitchen restaurant furnished with seats at the desk where you can appreciate a menu based entirely on Gragnano’s IGP Di Martino pasta, from antipasto to dessert, Under your eyes, Chef Pierpaolo Giorgio, starred Peppe Guida’s disciple and its team will prepare an amazing variety of pasta dishes. 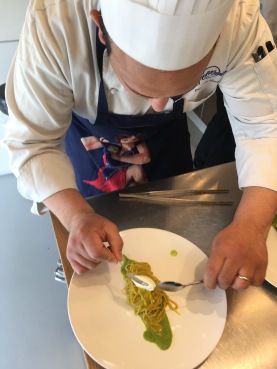 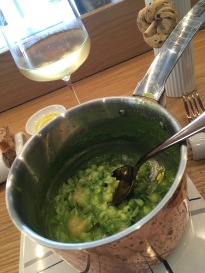 I started with is the true protagonist in its more than 120 formats. Ideal place for a sophisticated dinner, but also for a quick-lunch, alone or with friends
The direction of the kitchen, the consultancy, the authoritative and wise as skilled longa manus is Peppe Guida. At the stove, in a pleasant way interacting with the gourmets who sit around him and who observe everything with gluttonous curiosity, the good chef, of and pampering to the customer begin with a welcome from the kitchen, which is revealed in a triple taste of delights whose pivot consists of creatively interpreted pasta.
To the gallant Pierpaolo entrusting us, impeccable service with specific cutlery for each dish, and equally impeccable suggestions of combinations, starting from Mista Corta with crustaceans and their bisque to the traditional Devozione