On October 25th your table may boast of one the most popular, loved, delicious and always surprising dish. I am talking about Pasta, the simple dish with basic ingredients, can be transformed into thousand of versions, either traditional or innovative.

The occasion?  The annual celebration of the world pasta day .
In Italy pasta is a true religion: a classical Sunday dish that confers the all family.Traditionally in the South lasagna or pasta al forno are slowly prepared on the early morning r even the night before then revamped in the oven or taken room temperature at the beach , to be often eaten in a boat crowded by the family, relatives and friends…

Let ‘s start with…
BENEDETTO CAVALIERI  the so called Chevaliers of Pasta..
It is since 1800 that the Cavalieri Family has been committed to the growing of wheat in purposely chosen fields in the heart of Apulia.

Today Andrea, representing the fourth generation of pasta makers, together with his father he is bringing on the family tradition with great enthusiasm and seriousness. 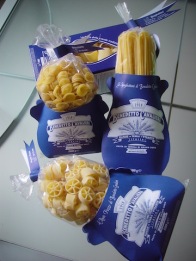 Here the amazing Paccheri and the iconic Rotelle
where the sauce is literally kidnapped by the wheels.

Let’s jump!
…into the classy, rich&famous populated world of CIPRIANI
In 1931 a long-sought dream became reality. Giuseppe Cipriani opened the doors to Harry’s Bar. In a discreet stone building perched along a canal just off Piazza San Marco in Venice, he created a timeless and impeccably appointed establishment.

I choose the wornderful green spinach Tagliarelle and Tagliardi,
little squares of our pasta.Delicious with ragout or pesto. 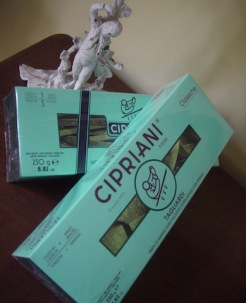 The Italians’ imagination with pasta has no limits; hundreds of shapes
to be served with hundreds of different sauces, vegetables, meat or fish.

Each region offers a wide array of varieties. From Spaghetti to Penne, from Lasagne to Rigatoni, from Farfalle to Tagliatelle, from Linguine to Tortellini…to colored and flavored pastas with squid ink, curcuma and chili and….
You name it!

Check  for example
the  siscarelli by GRAGNANO IN CORSA shaped as blowing whistles. Tradition says that the kids used it to hiss in the years of World War II, in order to alert men arrival of Nazi patrols. Nazi started to seize and banned the use of real whistles. , so kids adopted this pasta that literally make a sound when is blowed, useful and, if necessary… easy to hide by swallowing. 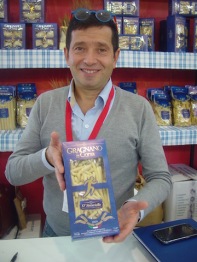 Who is eating what?
Here a chart of the world preferences.
I knew spaghetti would be globally popular but, what a surprise…
let me congratulate with fusilli… 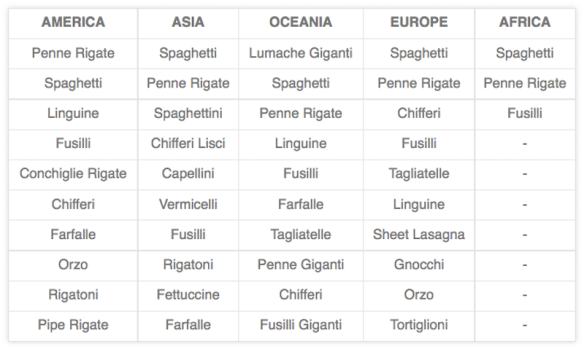 Let’s ‘plin’ i
BON APTIT is the pasta ambassador for the Piedmont
Langhe and Roero regions (province of Cuneo)
Rino and Mauro Tesio, owners of the pasta fresca  factory in Corneliano,
ThIs name comes from the simple gesture that housewifes makes to seal off the parcels, which in Italian is pizzicotto (pinch) called “plin” in Piemontese dialect) by pressing down on the pasta with the thumb, the index finger and the middle finger of the hand. Best served with sage and butter,

Rino and Mauro Tesio, owners of the pasta factory Pasta Fresca Bon Aptit in Corneliano, since 1988 have been working hard to satisfy the cravings of pasta lovers, because this dish is a healthy and nourishing food which has made Italy famous all over the world. Ravioli del plin with braised meat are the traditional version of this pasta format, which is very popular in the Langhe region.

Bread under the snow!
REGINA DEI SIBILLINI Defines herself as Pasta di Montagna (mountain pasta. In the Sibillini mountain, corn sleeps protected and warmed up by a white snow cape. It will became pasta. My suggestion: Mezze Maniche

Let’s travel to Mantua!
FREDDI  The flavors of the best meats from beef and pork, combined with the typical sausages valances, are enhanced by the Parmesan cheese. They are excellent in soup or with melted butter, but the typical recipe from Mantua is the sorbir of agnoli: where pasta is served in a hot cup of broth with red wine

Frozen work!
DIVINE CREAZIONI SURGITAL  created Fossatelli del Rubicone, a frozen  fiiled pasta that takes us to a Sogliano, a little town in the Romagna region is known not only for the historical river Rubicone, that Emperor Julius Caesar crossed sentencing Alea iacta est (“The die is cast”), but also for the traditional formaggio di fossa, a cheese that is buried at the end of August in a special underground pit (fossa) and resurrects in late November. 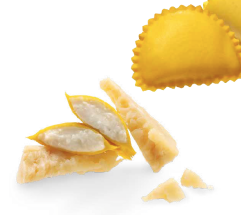 The technique of the infossatura (the burying) is dated back to the 15th century and used to hide food in secret pits to protect them from the raids of the Aragonese troops. 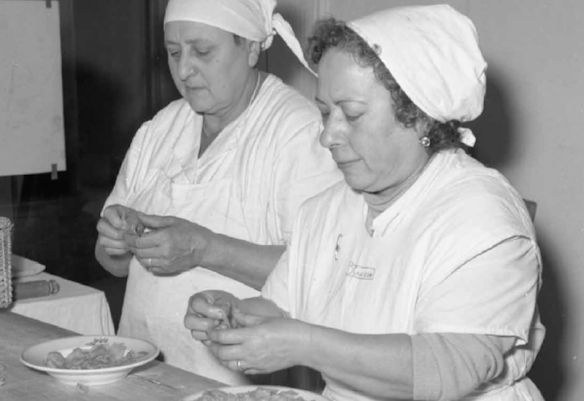 Life is a combination of magic and pasta
(Federico Fellini).