Skip to primary content
Forty four years have gone by since Escher’s death,
still today his art doesn’t show any sign of dating,

He turns geometric research and rigour into the purest visionary aesthetics,  combines a range of different languages into a new and intriguing itinerary that represents a one off in the history of art across all ages and continues to thrill the wider public.

A  super exhibit of the one of a kind artist who used to say that “Wonder is the salt of the earth”, is greatly hosted by the Palazzo Reale in Milan till January 22th, 2017.

Escher may be credited with broadening the imagination of those who gaze at or have gazed at his works, where everything is connected: science,
nature, analytical rigour and a contemplative quality. 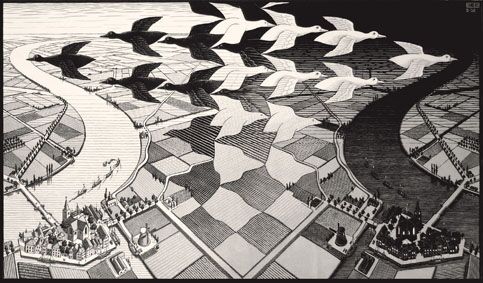 The ‘Escher like’ world today
Escher’s art left the confines of the studio and was transformed into gift boxes, postage stamps and greeting cards; it entered the world of comics and ended up on the LP sleeves of famous bands like Pink Floyd; and his impossible structures are used to allude to paradoxical situations or to astonish people with unrealizable constructions. Echoes of engravings (such as Relativity or House of Stairs) are to be found in the whirling stairs which lead Mickey Mouse and the Simpsons to get lost in an Escher like world.

Escheriansettings have been used in commercials like the one for Audi in 2007, based on the famous print Waterfall Hand with Reflecting Sphere Other World and Belvedere
were used by Illy Caffè for a 2006 advertising. A scene in the fantasy film
Labyrinth (1986), starring David Bowie and produced by George Lucas, is built around House of Stairs. Even the famous staircases at Hogwarts, in the Harry Potter saga, are a
dynamic transposition of this work, which also inspired one of the most striking scenes from Night at the Museum 3 and a Sky commercial.

And what about that rumor that Escher refused to work or have his work
used by Mick Jagger and the Rolling Stones?
Absolutely true.
On January 1, 1969, Mick Jagger, a big Escher fan, wrote a letter asking the Artist to provide an image for the Stones’ second volume of greatest hits. Well…turns out Escher was NOT a Stones fan, apparently preferred Bach and… the English rock band
Mott the Hoople, which could use a colorized versionof “Reptiles”
on their self-titled debut album in 1969.

No photo except the designated areas, where games of illusions optical dreams and mirrored mirages, will definitely catch you. Impossible not to selfie…

Escher exhibit will hypnotize you with
the images an Artist who said
‘My work is a game, , a very serious game’ 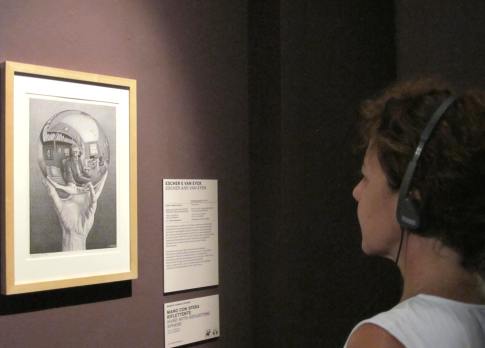