Il Giardino degli Amanti (The Lovers’ Garden ) is a new creation at the La Scala Theatre, Milan that should be considered one of the first 2016 tribute to the 225th anniversary of Wolfgang Amadeus Mozart’s disappearance.

There is a party at the villa.
In the garden, a chamber orchestra plays Mozart’s wonderful quartets and quintets. 12 elegant guests dance and have fun.Their moves are modern and quite contemporary.(I visioned some West Side Story jumpsand even a “let’s twist” attitude) .

Among then a beautiful couple

The man blindfolds the woman and takes her to hidden places. Soon the the labyrinths of the maze are populated by Mozart’s Commedia dell’Arte iconic characters such as Figaro, Count Almaviva, Rosina and Susanna, Don Giovanni and Leporello, Fiordiligi, Dorabella, Ferrando and Guglielmo. 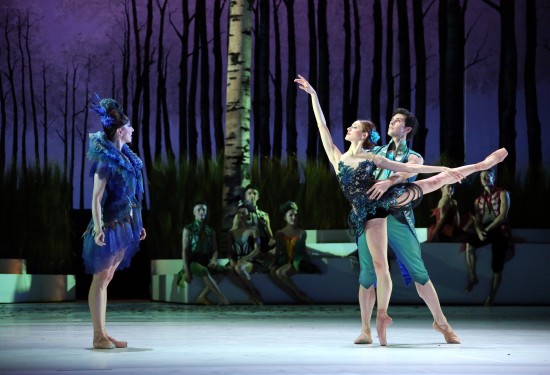 The couple gets lost in the maze and will find himself at the end, transformed by the Queen of the Night (Marta Romagna) who is leading young people within this world and make their metamorphosis. I loved the remarkable Bolle’s solo, while is using his jacket as a dance partner among the intense pas de deux between Roberto and Nicoletta Manni wearing an amazingly beautiful aerial tutu. 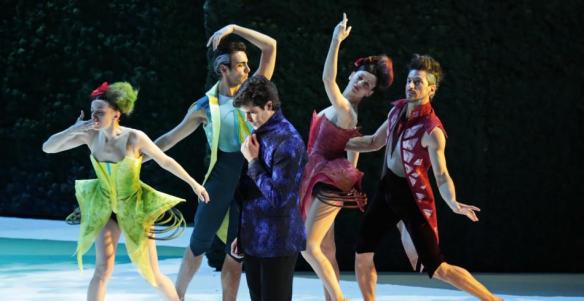 With lightness and irony this journey into Mozart’s nod to ‘700 also in the sets and Erika Carretta‘s costumes (from classical characters to insects, fairies or dragonflies) who likes to spam from some graphic black- off white , to shades of blue and turquoise, to multicolored outfits. Grand finale with Mozart himself taking the stage while playing the piano in flowered platform..
Here the next performances,
featuring Roberto Bolle, Nicola del Freo, Virna Toppi and Martina Arduino)
April 15th Arduino, Del Freo
April 16th Toppi, Bolle,
April 17th Toppi, Bolle,
April 19th Arduino, Del Freo.