I spent 4 fantastic days in a fantastic city: Turin, capital of the Piedmont Region, Italy.
Turin is a remarkable treasure of history , arts, culture and…great food. 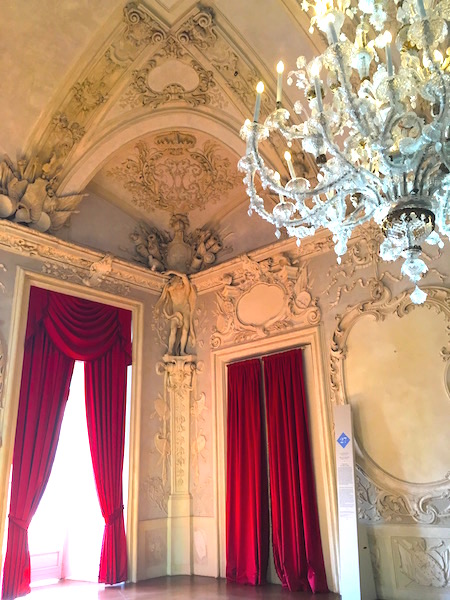 Let’ s start with the history. Many venues to visit, so I choose two of them and I adventured myself in a fascinating journey through the Royal Palace and the Savoy dynasty. The breathtaking apartments, the Royal Library, the Royal Armoury, the Savoy Gallery, the Archaeological Museum and the close Guarini’s Chapel of the Holy Shroud  recently reopened to public.
The next day I went to Venaria, the monumental Savoy Royal Residences and gardens, housing one of the most important centers for art and culture in Italy.You will be amazed by the enchanting Hall of Diana, the huge complex of the Stables, the famous golden ship Bucentaur and much more

The venue hosts several great exhibits, including Easy Rider, a glamorous exhibit that celebrate the magical world of motorbikes, evergreen symbol of “leaving the world behind”, “freedom”, and “speeding into the unknown”. and a great photo gallery showcasing the amazing work of Elliott Erwitt. 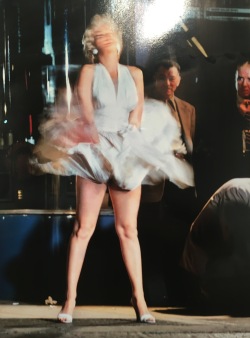 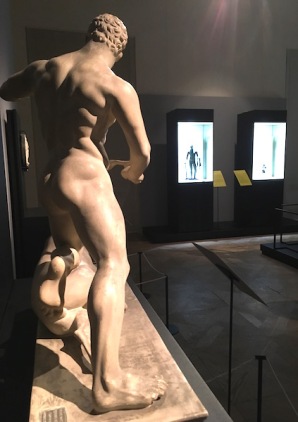 The current exhibit Hercules and his myth focuses and illustrates the figure of the Hero with a selection of extraordinary paintings and art objects created in classical antiquity and between the 16th and 18th centuries and literally surprising the visitor with an unexpected selection of those pretty tacky 60’s-70’s movies and their posters, starring the very first Superman.
Looking for a unique museum?
National Museum of Cinema, located In the iconic Mole Antonelliana, symbol of Turin.

It runs vertically, up the ramps that line the inside of the building while exposing historical archives in film history, costumes, wigs and elements that have been used by great artists, and impressive screens showing films.  On the year commemorating the centenary of Leonard Bernstein’s birth, one of the biggest composers and orchestra conductors of the 20th century, the NationalMuseum of Cinema organised a large multimedia exhibit

Soundframes that investigates the complex relationship between music and moving images.

From the first musicals, to impressive scores created by great composer such as John Williams, Ennio Morricone, Hans Zimmer, etc.The exhibit is exclusively made up of screenings winding along the Temple Hall’s helicoidal ramp. Visitors to the exhibition will be provided with wireless headphones that are necessary for a 360 degrees immersion. To complete this emotional journey into the universe of music in cinema, the last part of the itinerary consists of 6 rooms with highly interactive features. 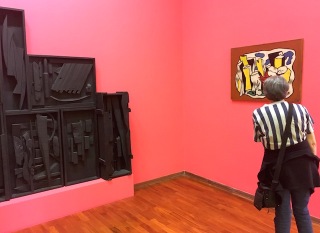 :
GAM. In addition to its rich collection, starting Oct 26, the museum will host THE MACCHIAIOLI Italian art moves towards modernity, an exhibition that focuses on the antecedents, birth and highly successful debut period of Macchiaioli painting, spanning the experimentation of the 1850s and the masterpieces of the 1860s, exploring in-depth the artistic dialogue established between 3 Italian Regions: Tuscany, Piedmont and Liguria.

MEF is hosting 100% ITALIA, a journey through the three great wars that have changed the world and its perception and, above all, an accurate account of Italian creativity.
The show proposes a selection of exceptional works never exhibited. masterpieces that are usually kept in private collections and that are hardly exposed to the public     . 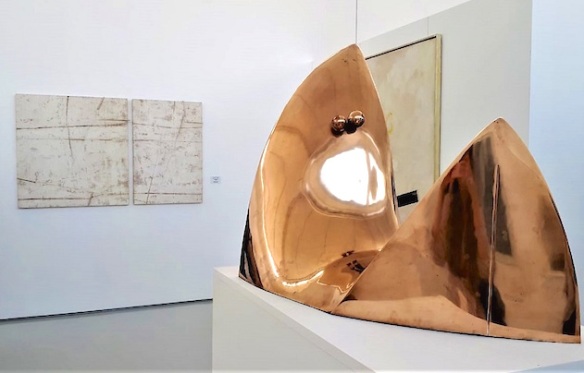 Welcome to Turin, Capital of taste!

On my arrival night, lovely Silvia from TurismoTorino.org took me to one of her favorite restaurant, Tre Galli, located in the heart of the Roman Quarter, one of the oldest areas of Turin.

There I became 100% Piedmontese! Boiled tongue with the traditional salsa verde (anchovies, parsley, bread soaked in red vinaigrette, garlic and egg yolk) Then panissa risotto with beans and bacon, a traditional peasant dish also known as paniscia depending on the local dialect, and here served in a metal can. Silvia ordered Agnolotti alla Piemontese, that are fresh pasta dumplings, similar in shape to ravioli and stuffed with tender fassona meat. I tried one: it was rich, generous and tasty.> 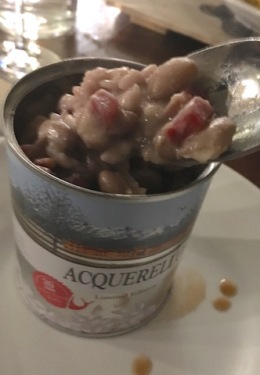 To follow, a delicate flan with leeks and fonduta of Toma Montecauri cheese.
Sweet finale with a bonet (peach stuffed with a creamy fusion of Chocolate and nuts.

Caffè Elena
Established in 1800, right in the heart of the magnificent Vittorio Veneto. Here furniture and atmosphere have remained unchanged.Ideal for breakfast as well as the lunch break or a later aperitif paired with  high quality tapas made on the spot. I sat at the small table by the window, the one preferred from Emilio Salgari the world best pirates stories writer I had handmade potato gnocchi with sausage and sheep cheese, then grilled fassona (super tender meat) with arugula salad and parmesan cheese.

For dessert, I had panna cotta
made with a historical recipe, adding Vermouth Carpano, a bitter drink invented in Turin ,
cacao and hazelnut crumble. Yes, You need a long walk after that lunch. 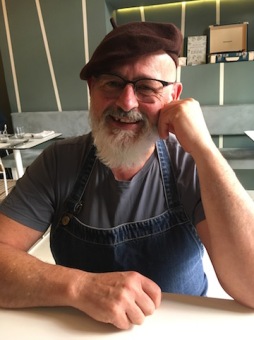 ‘We are a vegetale–integrale restaurant’, told me Antonio Chiodi Latini, the quite bizarre owner and creator of this minuscule venue in the center of Turin. ‘No meat, no fish, no derivates, not at all those sad unflavored vegan dishes. We don’t want to be a trendy place, We like to research , experiment and have the right knowledge of raw materials, their benefit, their taste. We propose a new approach to healthy food, whole foods, paying attention to plant-based ingredients, placing them at the center of our dishes in all their simplicity’.
At lunch, the menu offers 5 choiches, Business, Image, Premium, Whole and Experience (to be booked in advance)

Under Antonio’s authorisation, I mix matched some of the choices, Starting with a porcini and cream on stale bread, followed a velvety watercress and Swiss chard with roasted pumpkin seeds, a broccoli cream, then the signature dish called  ‘PA-PO-BA,we can’t do without it’ (that’s PAsta, Pomodoro, BAsilico) 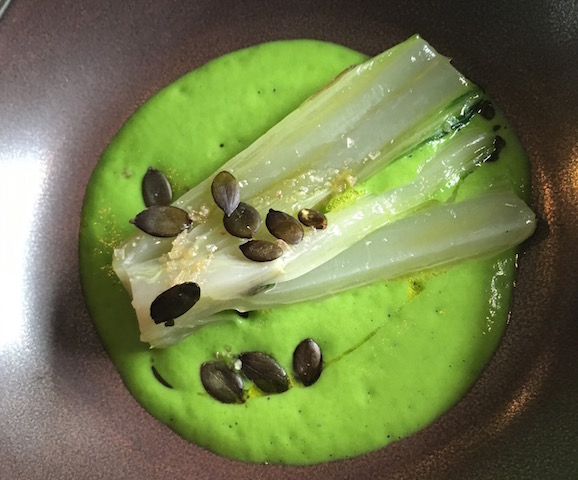 and ending with the ‘chilly’ sorbet Freddoloso (90% fennel, cardamom, cream of parsley.) As drinks a healthy kombucha (fermented tea , pine needles and cones) and a delicate smoothy with fennel extract, celery. green apple, lemon, ginger and zucchini squash.
Pizza maniac?
Tasteit
An unusual concept for making pizza. It is called ‘gourmet pizza’ and you will be the creator! You have the possibility to have ‘your’ customized pizza, choosing between the selection ‘earth’ or ‘sea’. In the first section there is a great presence of parmigiano cheese because the manager Domenico made a long culinary experience in Emilia-Romagna, Parma ham or Ghirardi reserve smoked scamorza, the famous culatello di Zibello, porcini mushrooms, pesto of parmesan rucola in poppy seed crust. Any sea proposal? There is no lack of unusual couplings, such as the amberjack fillet paired with spinach, guancialino slice and porcini or a tuna and shrimp tartare with kiwi, orange citronette and grapefruit zest, or low temperature cooked octopus, mashed potatoes and taggiasca olives.

The most popular? With stracciatella, pork fillet cooked at low temperature, lard from Colonnata,  sprinkled crispy bacon and sesame seed vinaigrette. For lunch, the menu takes on a more business format with the choice of two first and three seconds. I chose amberjack risotto with tomato and cheese stracciatella. Perhaps because of the late hour (it was almost 2.00 pm) to my taste, the rice was a little overcooked.

The score went up  with the arrival of a slice of pizza scampiamola which takes its name from the raw scampi paired with a delicate guacamole just flavored with shallots, pepper and just a drop of tabasco (thank God! I hate  guacamole full of garlic, coriander and onion !)

Cosy little bar that will delight you with its creation. I tried the one called  Maialino nel panino (semi-sweet bread, pork strips cooked at low temperature and the chef’s sauce) the always classic black bread and Mediterranean anchovies and ‘U pulpo’, crispy octopus, scamorza cheese and herb mayonnaise. To drink, a FOG crafted white beer.

Your destination is the store of Guido Gobino where you will find the cremino al sale, a chocolate praline enriched with integral sea salt and extra virgin olive oil, was awarded in 2008 as the Best Praline of the World from the prestigious London Academy of Chocolate.Are you a coffee lover?

Do not miss Nuvola Lavazza Museum. Lavazza is one of the oldest Italian factory producing coffee since 1885. The museum is a  multi-layered journey through the world of coffee, from the first grocery store where Luigi Lavazza invented the concept of blending, to the characters from advertising campaigns to yearly calendars, shoot by renowned photographers such as Helmut Newton, and Annie Leibovitz.
To end the journey at the bar where you would tray some experimental coffee drinks or food, like the amazing coffee sprinkled chips.

Did you say burger? 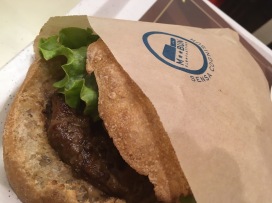 Check out  M** Bun, first ‘slow food’ burger of the history .
They use only meat processed in the Scaglia farm in Rivoli, strictly Km.0 obtained from animals raised and fed with cereals and fodder grown in their fields, to guarantee a unique taste and consistency at every bite.
In addition you can find different raw tartare  (plain, with capers or olives.

The menu is a fanny mix between Italian and Piedmontese dialect, burgers here are oven grilled, chicken, fassona, pig. and a daily winter soup. The potatoes are to die for: absolutely fresh-cut and grilled to perfection. (forget those greasy fast food fries.) To drink artisanal beer from Susa, local wine and Molecola, a home-made alternative to Coca Cola. I got one and took me a minute to realize that even here the name is playing with words, mixing Mole ( the symbol of Turin) and Cola, as per the drink….

My favorite restaurant with traditional Piedmont cuisine? The istorical Porto di Savona opened in 1863 and still one of the most representative venue in Turin.

I started with a mix of traditional appetizers vitello tonnato ( cold veal with tuna sauce),

Zucca, which is my last name. In italian, it means ‘pumpkin. Long story short, I couldn’t resist to try a little bit of a very promising pumping creamy soup with robiola cheese and amaretti. It definitely was a good choice. 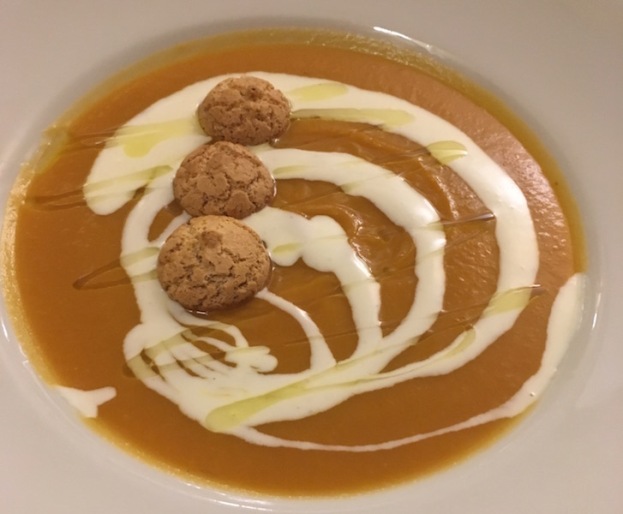 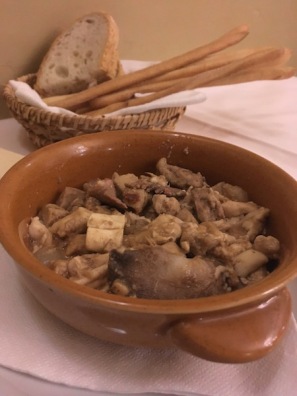 Then I had the opportunity to taste the Finanziera, a real Piedmont treat. Apparently it was born in the eighteenth century and offered by the peasants to the revenue officers, whose jacket inspired the name. y. It’s  an old poor recipe that used the less noble parts of slaughtered animals and the entrails, such as brain, lungs, testicles, sweet bells, liver and cock’s crest which were left to those who performed the slaughter and immediately cooked, prepared and consumed.Today the Finanziera is considered an elaborate and sophisticated specialty.

Where to stay?
I checked in at Genova Hotel, a four star Best Western Plus property, steps to Central Station Porta Nuova and all the transportation. Super central, excellent service, comfy bed, even a jacuzzi in my room! 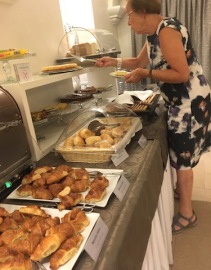 The breakfast is generous and delicious. Among fresh cold cuts, a lot of cheeses, including my favorite tomini.
Lots of homemade cakes with fruits.
I loved the one with caramelized pears and
(of course) the traditional Turin gianduja chocolate.
I stayed 4 nights and I highly recommend it.

Free admission in the most important museums and exhibitions in Turin, in the castles, fortresses and Royal Residences in Piedmont and discounted tickets for many attractions, events, rides, including the great City SightSeeing Torino bus