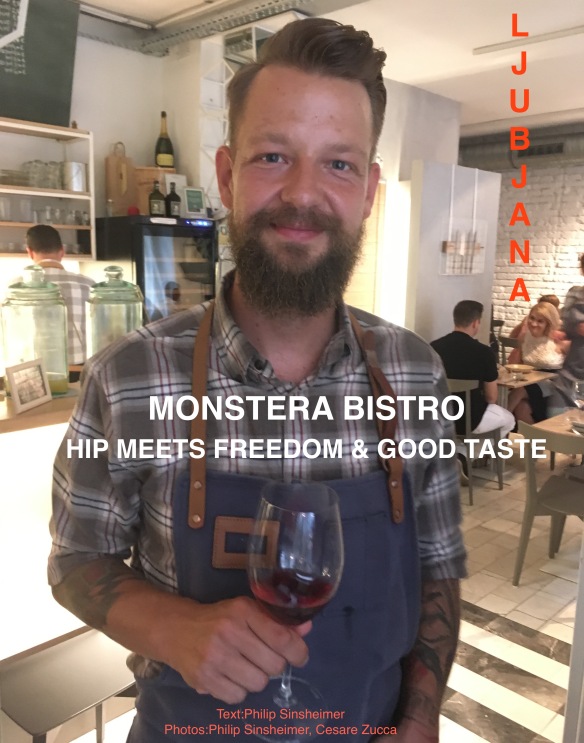 Engaging bearded chef with tattooed forearms, check. Sleek modern space with minimalist wall and plate aesthetic, check. Local sourcing and seasonal inspiration, check… All the basics of a trendy, hip 2018 restaurant seem met at Monstera. Could it be anywhere in the world? Absolutely not, you are in Ljubljana, capital of Slovenia and chef Bine Volčič makes sure that his vision is not an empty box, a mere concept, but yields to a unique experience. Why ? Because, beyond the trends, he has done everything possible to be and remain a free chef. Let’s step in… The restaurant is in the center of Ljubljana, one quiet street away from the riverbank where tourists abound . The place is small, really small, elegant, but humble… Especially when you get to learn the chef’s accomplishments which could have led him to seek grandeur, instead he chose intimacy. In case you didn’t realize, you’ve just entered the restaurant of a celebrity chef who has participated in four seasons of the Slovenian version of Master Chef.

His pedigree is flawless, determined to become a chef as soon as 7 years old, he jumpstart his professional ambitions by a formal training at the Cordon Bleu school in Paris, leading him to work at some of the French capital’s most prestigious restaurants (Apicius, l’Arpège…) and work for such big name as Joël Robuchon. Back in Slovenia, he ends up running the restaurant of a 5-star hotel in Bled. Add to that a TV boost and you have the perfect recipe for the rise of a flashy, expensive gastronomic restaurant. No, not for chef Volčič! What all this brought him: freedom, absolute freedom! Rather than slapping his name on top the bistro he opened two years ago, he chooses the rather risqué name of “Monstera”. No monsters to be found here, but a personal wink to the exotic plant that was so prevalent in 1980’s, when Slovenia was part of communist Yugoslavia. This mundane decorative plant has its secret: an unsuspected fruit with aromas of pineapple, kiwi, strawberry and banana, thus the scientific name Monstera deliciosa and nicknames such as “fruit salad tree”. The metaphor behind the restaurant’s name: behind the unassuming appearances, there can be hidden treasures and a symphony of flavors. OK, now, how does that translate itself onto the plate? We are getting hungry here! Don’t look for a long menu to pick from, there is none. The menu changes every few days, at the chef’s will, composed of two appetizers, two main courses and two desserts, with vegetarian options. The dinner goes free-style with a 5 or 7 course tasting menu and you are in the chef’s hands, which was our lucky experience.

.Among the other things tasted were a beautiful deer carpaccio (locally sourced of course, forests and mountains aren’t far), charred cauliflower, wild flower and herbs. Bingo!

In honor of neighboring Italy, a couple of beautiful tortellini (pic) with a creamed porcini mousse and a genius tarragon oil, a wink to the French ubiquitous herb which traditionally used in Slovenia in sweets such as the potica rolled pastry.

As dishes come along, were invited to taste some fantastic “natural” Slovenian wines,  meaning made from grapes organically, hand-picked grapes, fermented with no added yeast and no added sulfites.

The unfiltered Marof Sauvignon from the Prekmurje Eastern region bordering Hungry, was outstanding in its depth and minerality. For the amateurs, there is also a local craft beer, of course, and homemade herb and fruit syrups to pair with pure Ljubljana water.

Certain of the chef’s creations are really off the chart, such as this combination of tempura of jerk marinated tripe with fork tender grilled octopus (pic), served
with a combination of the two ingredients cooking juices.

The finishing touch came with a fruit forward dessert with an unforgettable ice cream with a distinctive almond flavor that came from integrating in the tiny “nut” inside the cherry pits.

This is a no waste restaurant which goes along with ecological responsibility, but also serves as a creative incentive and flavor boost. Vegetable peels, for example, are dehydrated and then turned into a seasoning powder.

Don’t judge a book by its cover, the saying says. As tiny and unassuming as the restaurant can appear from the outside, Monstera will elevate you to high spheres and get you to taste the unmistakable freshness of freedom at its best. Reserve now!