The theatrical company I Legnanesi was born in 1949, in an oratory of Legnano,
The exclusively male nature of the company is due to an ancient ecclesiastical ban that prevented to women to act with men, so that women’s roles were interpreted by the same male actors in disguise, talking in the Legnanese dialect.
The company became famous and performed in mayor theaters, gaining great popularity and winning several awards.

The new show I COLOMBO VIAGGIATORI , is all about the traveling adventures of the  Famiglia Colombo formed by the man of the house is (or at least he should be) Giovanni (Luigi Campisi) his unsinkable wife Teresa (Antonio Provasio, who is also co-writer and director) and their glamorous daughter Mabilia (Enrico Dalceri) a not-so-young blond shell, always looking to get married to a rich guy.
The action takes places in the courtyard , when an unexpected news arrives.
Gege’, the Colombo’s long distance adopted brasilian son, now grown up, is coming back to Legnano to meet his family. He ‘s a rich guy , owns 3 boats and invites Mommy and Dad to a cruise to Brasil, not only,  he hires Mabilia as the star of the show. 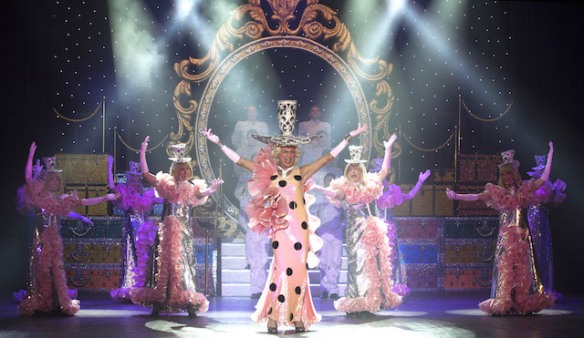 Mabilia offers some glizzy musical numbers, first with a tribute to the iconic italian musical diva Wanda Osiris, then as a flamboyant Carioca singer escorted by colorfull young dancers,while in the grand finale: all actors show up as “men” in ” elegant tuxedos.

This new sparkling episode of the Colombo family is ready to entertaining the audience and will be on the stage of Teatro Nazionale , Via Giordano Rota,1
in Milan till February 19th then to ‘crossover’ the milanese public, ferforming ‘ abroad’ in many theaters all over Italy for a very long tour that will include Genoa, Bologna,Reggio Emilia, Bergamo, among many cities of Lombardy and Piedmont regions. untill the end of May 2017!
Here more info www.ilegnanesi.it
To buy online tickets